Last night I had a dream that I believe goes with the dream I had in August and also compliments Tim Sheets dream about The Turnaround.

I dreamed that I was traveling on a 4-lane highway away from the City and had to TURNAROUND to be able to go back into the City. I got in the turning lane to approach the turnaround place and there were 3 entrances divided by median areas that I could choose to turn onto the Highway back into the city-

I made the turn and then was on the highway headed back into the city. I could see Washington DC in the distance. Then, in front of me the entire highway on both lanes had huge holes and caverns in them – for a long stretch. I was able to see down in one and there were rooms in them – hidden places. The only passable place was the narrow right shoulder.

I believe in last nights dream The vehicle represented the President and his Presidency! This is a call to the Ekklesia as the government upon the Lord’s shoulder to bring President Trump into the White House!

I could not see myself in the dream but yet – I was in it turning – maneuvering and seeing- I represented the Ekklesia.

I also saw early this morning (like Tim) God caused the Sun to stand still until Joshua completely defeated the enemies of Israel and won the battle.

We decree the turnaround for this election. Donald John Trump’s presidency is destined for four more years in Washington DC.

We decree that every hidden place and agenda of the enemy that is attempting to block or thwart his way in the home stretch is exposed and revealed.

Father, we thank you that your Kingdom purposes stand for our President and this nation. Just as you caused the sun to stand still until Joshua completely defeated the enemy and secured the victory for Israel. Likewise, we decree that the enemy will not change the times and the seasons set for Donald John Trump and our nation. You timing if perfect!

We decree God’s purpose in election will stand for President Donald John (the Beloved) Trump!

We decree: God’s purpose in this election stands for the United States of America! Father we come into agreement with all the days ordained for President Trump that were written in your book before one came to pass.

We decree and declare that nothing will thwart your plan for him or this nation.

We decree that the Ekklesia is functioning in the full authority that you have vested in us. We are mobilized to out maneuver the enemy and release your intent into this nation!

In the name of YESHUA! 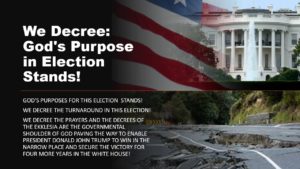