To the Righteous Remnant

Day 62
REBUILDING THE WALL OF RIGHTEOUSNESS IN OUR NATION, STATES, AND TERRITORIES

To the Remnant Rising,

Today, we are nine days out from the culmination of the 70 Day Decree which will ends April 19th on Passover 5779. I would like to issue a special invitation to all of you who have participated in the 70 Day Decree to join us and other believers across the nation to partake in 8 Days of Communion beginning tomorrow, April 12th – April 19th. The Lord has given us a strategy to continue to partake of communion every Tuesday through the 2020 election.

“They overcame him by the blood of the Lamb and by the word of their testimony; they did not love their lives so much as to shrink from death.” (Revelation 12:11; NIV) 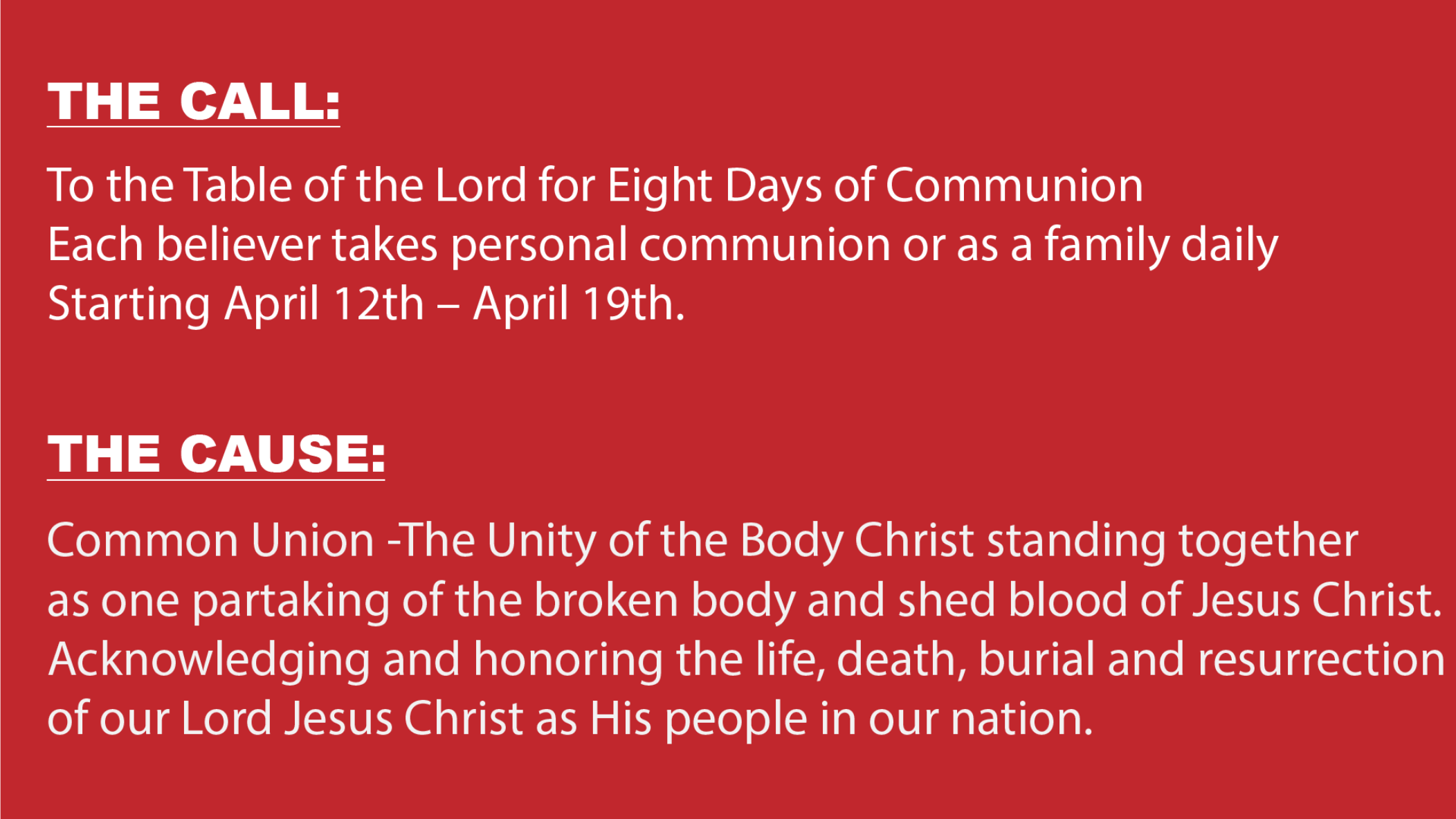 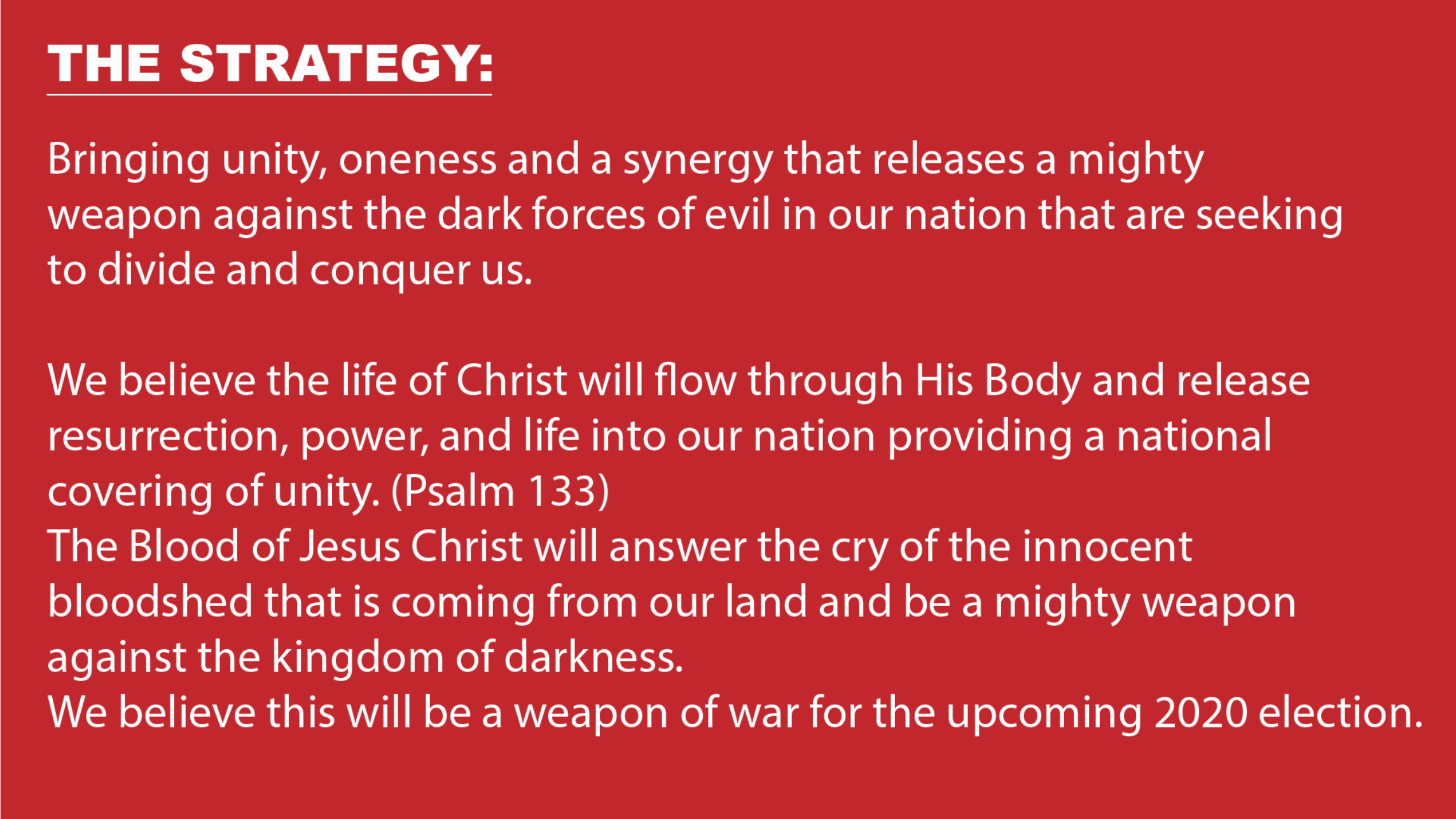 Prayer:
Father, we come into agreement with your Kingdom plan and redemptive purposes for our nation and the State of Idaho. We bless “The Gem State” in her birthright and prophetic destiny. Lord, let the resources stored in nature’s treasure chest within this state give up her harvest. Let your Righteousness Kingdom be established in every mountain and sphere of society in the State of Idaho.

“The Lord is checking the foundation of this state and removing what has comprised your destiny. Idaho is getting a reset in the areas needed. The Lord has determined that your true foundation will be established in righteousness and justice. Glory is in your gates, Idaho. The Lord says, ‘What has opposed and blocked your progress is being removed. The religious stronghold is being uprooted in your midst. Apple carts are going to be upset and overturned. It will look like everything is spilling out. But, I tell you even now – you will have fruit and fruit that remains for My glory.  I AM is coming to enthrone Himself upon your worship gatherings. Death, Infirmity and poverty structures are being dealt with and removed. Healing is coming to your land and to the people. The turnaround has already begun. Things are shifting quickly. What has been hidden will now be revealed. The Treasure State’s treasuries are becoming unsealed.” Lord, we say may it last forever! We ask for fruit and fruit that stands in this First fruit’s state.”(Betty Love, 4/10/19)

“God is saying, ‘I want to release an intimacy to you that is going to break something in the heavenlies. This worship is going to download revelation. The Heavens are going to open!’… Before Mormonism even got a stronghold in Idaho God knew how He was going to reverse it. ‘…I am overthrowing that which has been in your midst over the last 110 years and I am rising you up now as a group who will volunteer freely and go forth in a new way. I would say to you, you will wear this mantle with great authority and great favor and I will disburse you for I am opening up and say retrace the trails that came into this state that tried to capture this state from My purposes. I say you will go forth tracing the trails and as you do that which has been locked up as a Firstfruit offering to this nation will then be unlocked,’ saith the Lord. ‘…Go to that narrow entryway and raise My standard there and the enemy that would long to be hidden in this state will no longer have a right to be hidden.
‘And I say, watch the Cyrus’ that will raise up in this hour even in the Mormon Church for though they will not know My Spirit, they will know My way and you will hear wisdom coming forth through them. I say there will be a release that comes, much conversion will come, for I am going to apply the power of My cross and power of My resurrection into the Mormon Church.’
Idaho was at one time the world’s leading silver producer and more silver taken out of this state than any other state in the nation. Also, the gold rush that occurred in Idaho City, the mother lode was never found…There is a prosperity principle in this First Fruit release that causes the land to prosper. It causes what has been hidden to be brought out into the open. This is what I see with Idaho. It’s almost like right at your time when this covering needs to come off so the riches and the fruit of this state comes forth into a new level of fullness, it’s almost like the devil brings something else in. And you don’t know fully how to process the power of the loss to break through it. Through intercession, take the silver mines. If those silver mines don’t produce the fullness of what they were intended to fully produce, go there and worship, and before long the land will be producing again. The silver that’s hidden will begin to rise up and come out. Find the keys to restoration and watch the multiplication begin… We could all say God is going to continue to bring forth treasure out of His people but it was more than that. It has to do with this state, the land, and the resources and then in my heart when it shifted to people it was not just spiritual gifts, it was every kind of gift. It was creativity, it was insight, it was invention, it was wealth, and it was governmental insight. The Lord has been waiting for this time in history. There are things that are going to be uncovered.
(Chuck Pierce, 50 States Tour)

“God wants Idaho to be a First Fruits state that shifts into a place where they move by revelation and welcome revelation and war against the religious spirit that wants to stomp right through the soul…… There is a prophetic mantle for this state that you are not yet moving in…The only one, the only church that can operate in the keys that move into the heavenlies and bind and loose… is the church that moves in revelation…James said there are two kinds of wisdom, that which comes from above and that which is earthly, of the soul and is demonic.” (Dutch Sheets, 50 States Tour)

“When you became that first mission field for the Mormons…. it is as if when they penetrated into this state it brought the veil upon you and God is saying, “I am ready to break through this thing. I am ready to break it off of you. I am ready to cause revelation to come into my people that will uncover the blessings that are being stopped in this state.” (Chuck Pierce, 50 States Tour)

Father, thank you for a fresh mantle of your apostolic-prophetic anointing being poured out upon your people in The Treasure State… let the Cyrus anointing rest here and the riches that are stored in darkness be revealed according to Your word.  Revelation that bring revolution in this New Era! In Jesus Name, Amen!

We are partnering with VISUALEAST.ORG in 8 Days of Communion for the last eight days of our 70 Day Decree Raising Up Righteousness. This will be a powerful finish to the decree. Our dear friend, Priscilla Zananiri, will be sharing a powerful post daily that we will provide a link to on our sites.